Main application area is supposed as milling inscriptions and engravings. 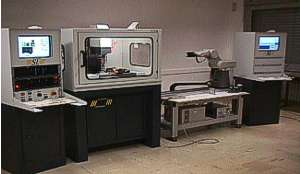 MPK-3 Card is a conscious attempt by ISEL to provide the customer with electronics, which can support - from the points of view of price, and of the open nature of the hard- and software architecture - a variety of applications.

The PC slot-in card contains all components necessary for driving 3 stepping motors, including 3 power end-stages. This card, especially when used in conjunction with ISEL stepping motors can meet the requirements of a variety of applications in the low- to medium power range.

Stepping motors are the important connecting link in technical operations in which input information is digitally processed and results in movement and positioning runs. They are capable, because of their operating principle, to act upon this digital information directly, without any further mechanical conversions. When a stepping motor is operated within a defined working range, feedback signals can be dispensed with. Because of its simplicity, the stepping motor is very frequently met with in practice.

Operating mode may be full- or half- or microstep, of which full- and half-step operation are the most commonly used.

This leads to the question - why then is it necessary to develop from full- and half-step to micro-step mode?

A weakness of full- and half-step operation appears at low speeds. Movement may be jerky. Also, because there is an obtrusive noise, it is unpleasant to be in the vicinity of such installations. This is of special significance in laboratories. The strong tendency towards resonating is a further reason for going over to micro-stepping.

It is a major feature of the system that the motors are driven in the so-called microstep mode. The unpleasant noise and resonances normally associated with stepping motors are considerably reduced. Stepping motors are controlled with such a high resolution that your workpiece finish will be of exceptional quality.

Our own Interrupt Generating Board was developed to support realtime control of the system under Windows 2000 operating system. It is based on three-channel one-chip programmable timer. Requirement of such a board is determined by the necessity of high-resolution timer with period of about 25 microseconds.

Hardware Driver was developed to provide the possibility to work with various hardware systems that require control in realtime mode.

The Driver is fully configurable from application supplied with it. It is possible to enable or disable required axes, reverse axes, specify motion area, spindle pitch, velocity and acceleration for normal motion and initialization. There is a possibility for additional controlling parameters for various applications.

Motion control is implemented as trapezoidal shape of velocity on trajectory to provide customizable smooth motion. Hardware Driver can combine consecutive narrowly directed lines to be considered as a single trajectory reducing the number of acceleration and deceleration cycles. Angle of the maximum inclination between lines to be considered as "directed narrowly" can be specified as a parameter of the driver.

The Driver can accept input data in HPGL language, and it is capable to control various external tools (e.g. laser, mill, etc) concurrently with the motion.

Printer Driver is intended to take part in rendering process together with GDI. It produces data in HPGL format with certain extension to implement features of specific machines that have differences in structure and functionality from usual plotters but are still closer to them than to any other computer peripherals.

Printer Driver is implemented like Windows Plotter Driver. It also has a set of pen options and a set of specific options for a machine.

Printer Driver works with vector and raster data. It distinguishes different colors reflecting them to tool parameters. For milling machine, user can specify motion speed and acceleration during drawing with configured pen as well as the spindle rotation speed corresponding to "pen down" state for every pen. User is prompted to set the type and size of drawing area.

Port Monitor Driver consists of user-mode DLLs. It is responsible for providing a communication path between user-mode print spooler and kernel-mode port drivers that access I/O port hardware. It is also responsible for management and configuration of server printer ports.

Port Monitor Server DLL contains port communication functionality and executes on print servers. It must not display a user interface.

Screenshots of Port Monitor User Interface are shown in Figures 4-7. 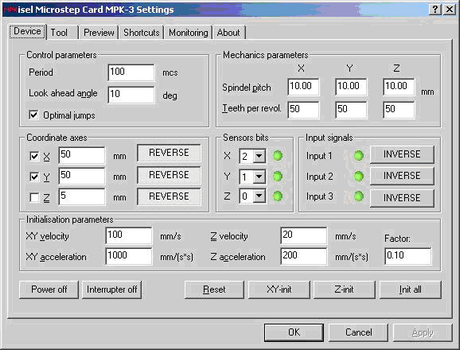 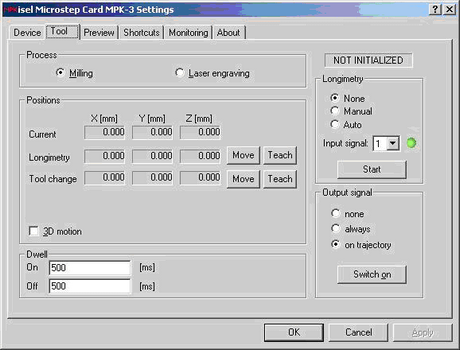 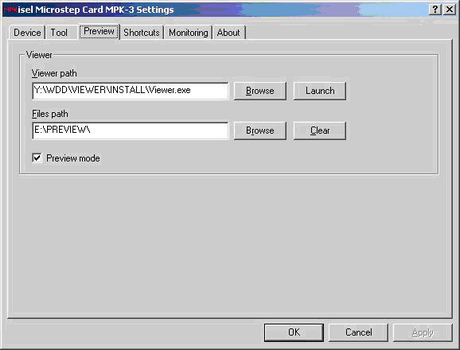 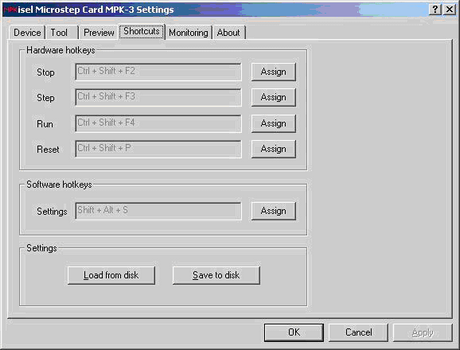 Screenshots of Motion Control Configurator are shown in Figures 8-9. 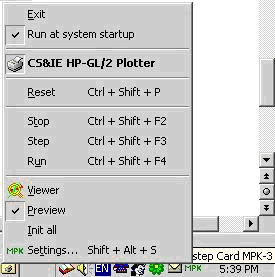 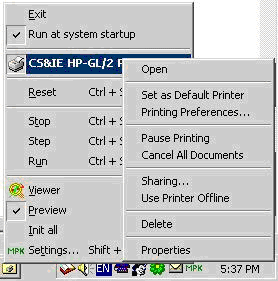 Milling Machine with ISEL Microstep Card MPK-3 controls up to 3 stepping motors with extremely high resolution and accuracy. Hardware and software set provides a very flexible and precise realtime control for a variety of applications in the low- to medium power range. Hardware Driver is configurable by the means of Motion Control Configurator. Together with Printer Driver, it is possible to use Windows standard graphical applications (such as Corel Draw, AutoCAD, etc) to control 2- and 3-coordinate systems. In combination with Printer and Port Monitor Drivers, the whole system is very flexible and convenient to use.